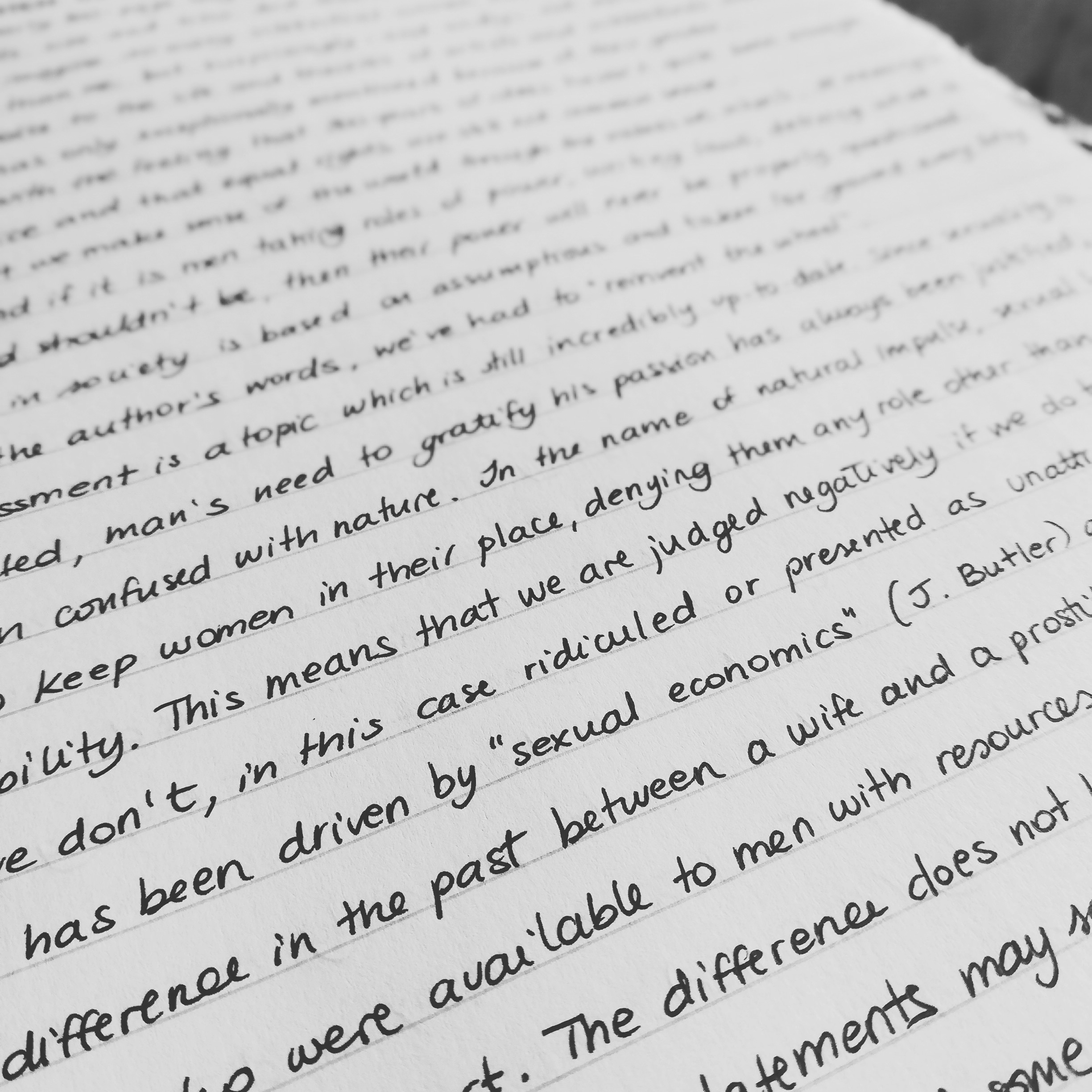 I came across this nearly 800-page long book in Barter Books, a second-hand bookshop in Britain. I gently took it out of the shelf and stared for a moment at both its size and title. Then it dawned on me: was I the only one who didn’t even imagine so many intellectual women had had something to say?

We make sense of the world through the values we inherit. If meaning is defined socially and if it is men taking roles of power, writing laws, defining what a woman should and should not be, then their power will never be questioned. Because our place in society is based on assumptions and taken for granted every fifty years, to put it in the author’s words, we’ve had to “reinvent the wheel”.

Sexual harassment is a topic which is still increasingly up-to-date. Since sexuality is socially constructed, man’s need to “gratify his passion” has always been justified; custom has been confused with nature. In the name of natural impulse, sexual harassment is a tool used to keep women in their place, denying the any role other than that of social availability. This means that, as women, we are judged negatively both if we do trade our bodies and if we do not – being ridiculed and presented as unattractive and repellent in this case.

The world has been driven by “sexual economics” (J. Butler) as there was no substantial difference in the past between a wife and a prostitute. Both categories described women who were available to men with resources and would exchange sexual services in return for support. The difference does not live within the woman, but within the man.

To the contemporary reader these statements may sound a bit OTT, but I sense that we have not quite managed to get rid of some derogatory terms. I am thinking of a popular series of YouTube videos whose creators want to test whether some random women met on the street are “good girls” or “gold-diggers”, depending on their reaction seeing the man’s car. I think these types of videos feed prejudice and keep the overlap wife-prostitute alive. They claim it to be a “social experiment”.

Historically, any woman showing independence, knowledge, intelligence or even superior beauty was to be considered a threat (see witch-hunting). For this reason, many of the women whose ideas survived had to write using a pseudonym, either a female one to avoid shame (e.g. Lady Montague wrote as “Sophia”) or a male one to manage to be heard (Sir Charles Grandlover, George Elliot).

Men imposed on women the qualities they regarded as negative and kept for themselves the creative energy (M. Fuller). Women had to be kept invisible, passive, dependent, all undesirable aspects for a man (M. Wollstonecraft, M. Astell). Intellectual and cultural life made a woman challenging for a man. It is still acceptable in some cultures and social classes to think that it should be better to marry a woman that has not studied too much.

Biographers have concentrated either on labelling intellectual women from the pasta s neurotic or homosexual. Rarely has their work been the focus of research. Their “sellability” as sexual objects has always interested more than their ideas, even when such an approach was not conscious. More often than not, we do still make the same mistake, at least in Italy, my home country. If the TV is on while having dinner with friends or family, it often happens that, if a woman is on TV (singing, presenting, dancing, reading the news, it doesn’t matter) someone will say something about her. This may be about her look (if she looks beautiful or not, if she is fit or not), her hair, her voice, her clothes, her body. If she looks pretty, then someone will claim that she is famous because she had intercourse with the right people; if she is not good-looking then someone will probably say it is thanks to her famous husband/brother/father if she is on TV. Again, most people do not do it consciously, but they still do.

Education was the other main tool used by men to devalue and erase us from history. In the Renaissance, Latin and Greek were kept as secret codes only accessible to men (A. Adams, A. Behn). Access to education had to be denied; women have been blamed fo rbeing ignorant, but men made sure that women were kept incompetent in order to be superior (M. Astell) and decide for them (G. Elliot). It was probably for this reason that marriage was seen as necessary, as the only way a woman had of surviving economically. In many countries this custom is hard to die and marriage is still seen as an aspiration for many women. In a society where men create the rules, men generated the idea that marriage was an ideal state. Keeping a woman ignorant meant keeping her dependent to an authoritative and unchallenged husband.

Women have to agree to male-decreed standards, primarily those of “happiness” and “sacrifice”. Women have had to pretend to be happy and to try as hard as possible to achieve the ideal of femininity (M. Fuller). It was compulsory for a wife to present a cheerful disposition no matter how miserable reality was. A wife had to be happy in order not to offend her supporter (F. Nightingale).

We have had to lie, charm and conciliate to keep men in their condition of indispensability (V. Woolf) and we have annihilated ourselves because of a “phantom” (F. Nightingale), better known as the “Angel of the House” (V. Woolf). We grow up with the ideal of a submissive devoted wife, passive and graceful. This ideal can only lead to frustration and guilt. We have not quite managed to destroy the internalised idea of the good wife. The one who sacrifices herself to keep the family together. The one who can find fulfillment only in motherhood (H. Taylor, Lady Montague) and at the same time accepts the disqualifying power of maternity (both from a physical, intellectual and a career point of view). The one who does not blame her husband for seeking pleasure elsewhere, as long as he comes back to the nest every single time.

In the past, it was so natural to accept that men should be unfaithful that a woman was not allowed to ask for a divorce only because of her husband’s adultery. This is because sexuality is socially constructed and who made the rules have always been men (Murray). Knowledge is influenced by the culture that produces it, but culture affects knowledge and values, in other words, what we know comes through men (S. De Beauvoir).

Chivalry has never existed either. Women in the past worked longer hours, had to look after the house and children, were paid less. Their husbands and sons would not relieve them in their own homes (E. Cady Stanton).

Women were – and still are – abused by their chivalrous protectors, experiencing not alone physical violence but also that subtle, untouchable agony, the psychological one. Feeling neglected and wrong and never enough for the “protector” who blames their significant other for their frustration and failure.

Information on birth control was considered obscene until 1935 (M. Sanger) and excessive maternity was justified by man’s needs. Post-natal depression was just an indicator of neurosis, as the woman was not matching the ideal of femininity; there was something wrong with her. Even if we do have contraception nowadays, how often is that a woman’s responsibility alone (with consequences on health as well)? 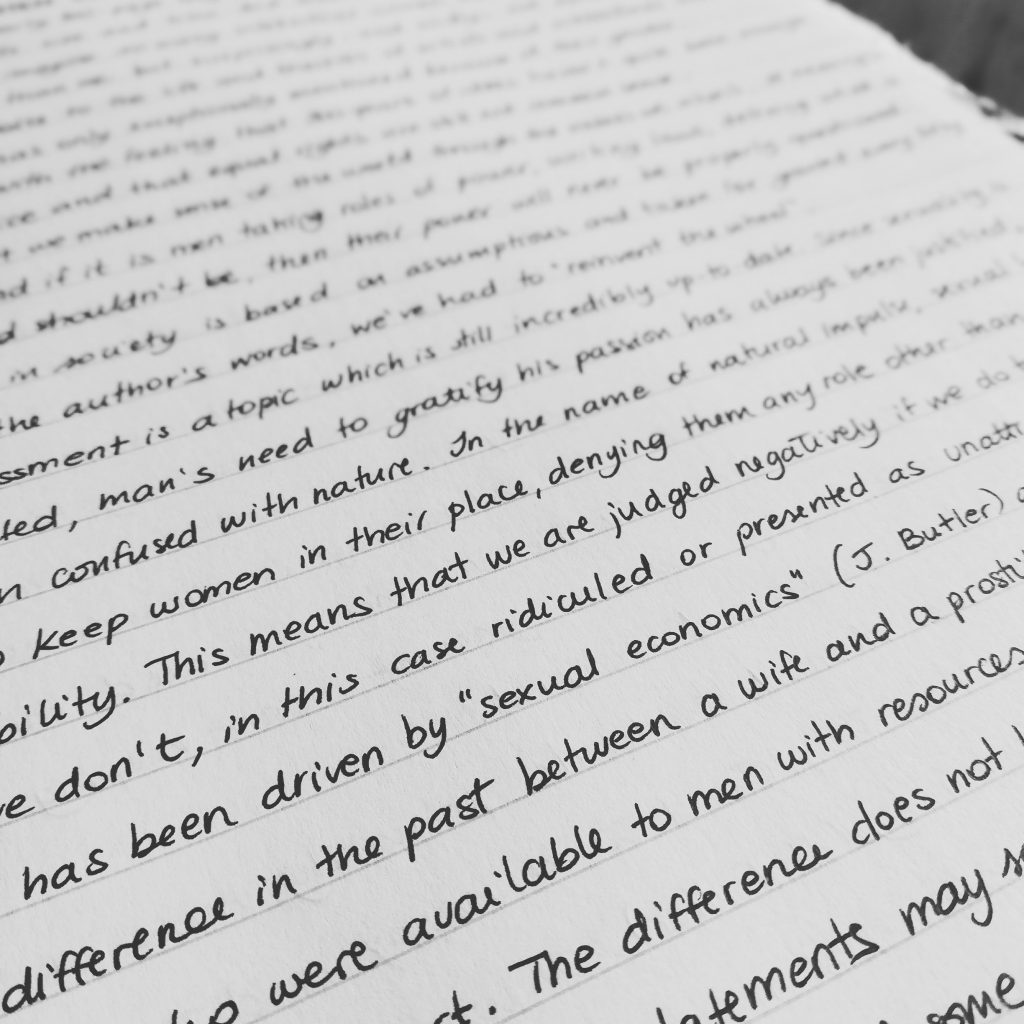 I found this book inspiring. The tone of the author seemed to me a bit harsh at times, but easily justifiable with her determination in challenging the schemata men have created for centuries. Dale Spender does not look for conciliation or approval. I do acknowledge that among all the men (and women) that find feminist theories laughable there are some that were brought up knowing that there are no major structural differences across genders.

I believe that our effort today should be on spreading ideas in order to achieve that substantial cultural change women have been fighting for, but we cannot shout if we want to be heard. Even if I have a chip on my shoulder myself for the ideological bondage we have internalized. Even if I hate having to be part of the half of the guests that leaves the table to help washing up after a meal. Even if I am from a country where a woman is killed every three days from someone “close” to her. I hope Women’s Studies cease to be something about women, written by women and read by women, a randomly chosen university course, or a heavy book we happen to find on a shelf in a second-hand bookshop. Maybe, no such thing as “women studies” should exist if we truly want to embrace equality.  Freedom, equality and respect are not a question of chance, they have to be taught to both young boys and girls and ideas have to be spread, history has to be shared. This, unless we prefer reinventing the wheel every single time.