Sunday…Monday… Happy Days! Where do days of the week come from?

Have you ever noticed that the words Monday and Lunedì don’t look that dissimilar after all? If you are Italian, you already know 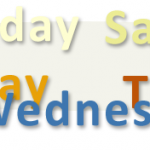 that dì is an old-fashioned way of saying “giorno”, that is day, and you may have also realised that in both words we have a reference to the Moon (LUNedì – MONday). But how is it possible if English and Italian are so different?

The days of the week in Italian derive from Latin and were named after Roman deities. The Romans in turn derived them from a very ancient system first adopted by Babilonian astrologists. Those scientists believed that the first hour of each day of the week was governed by the Sun and other planets.

English derives from the languages spoken by the Germanic tribes who moved to the British Isles back in the 5th century. The Germanic peoples had adapted the Roman system introducing their own gods over the Latin ones[1]. The whole process probably dates back to between 200 and 600 AD, that is before the introduction of Christianity and the collapse of the Western Roman Empire.

The Italian word comes from Latin Lunae dies[2] or “moon-day” and maintains the same reference in English and other Germanic languages[3].

“The day of Mercury”[6] becomes in English “the day of Wodan[7]”, better known as Odin. Odin shared with Mercury a psychopomp feature, i.e. they were both considered a guide of souls after death. In other Germanic languages[8], the connection with the deity is lost and the name of the day simply means “mid-week”.

In Italian it means “The day of Jupiter[9]”, whereas in Germanic languages[10] the word refers to the personification of thunder (Þunor) and the ancient god known in Modern English as Thor.

The day was for the Romans sacred to the beautiful Venus[11], who had her German counterpart in a goddess called Frigg[12].

In this case Italian and English followed different routes. The name of this day was originally in honor of Saturn[13]. Later on, due to Christianisation, the Hebrew word “Shabbat” substituted[14] the pagan name, but retained its etymology in English.

[1]  This process is called interpretatio germanica.

NORTHERN IRELAND Many of the accents spoken in the province of Ulster share common features with Scottish English. Here are some distinguishing features: 1)      Diphthongs in words like goat and

THE MIDLANDS As the word suggests, this is the “centre” of England. Here we can distinguish between East Midlands and West Midlands. The most famous dialect is the one spoken